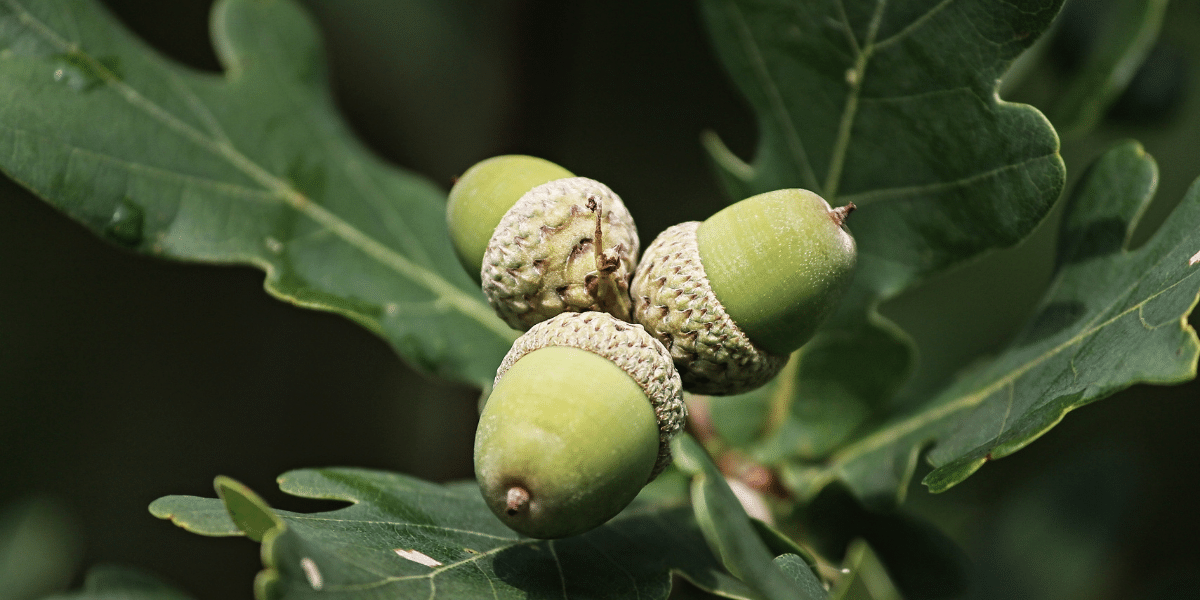 The special meaning of oak trees is just one of the reasons why they’re so beloved. Here in New Jersey the Red Oak is our state tree.  Oak trees are a symbol of courage and power. They’re popular because of their strength and resilience, as well as their unique growth pattern, expansive canopy, and gorgeous leaves.

Oak trees can last for hundreds of years. Because of their longevity and size, some other special meanings include wisdom and honor, as well as strength of character. In ancient European cultures, oak trees were regarded as the king of the forest. They are also considered to be very spiritual, which is where the term “Holy Oak” comes from. The trees are believed to be like spiritual guardians that can provide comfort and solace. Because of that special meaning, many places of worship are surrounded by oak trees.

They can also symbolize health, luck, resistance, morale, and survival. Oaks are also believed to be a healing tree, for the heart and soul, as well as the body in general. Native Americans would use bark from oak trees to treat frostbite, and there are also old remedies that involve using the bark for headaches and other ailments. 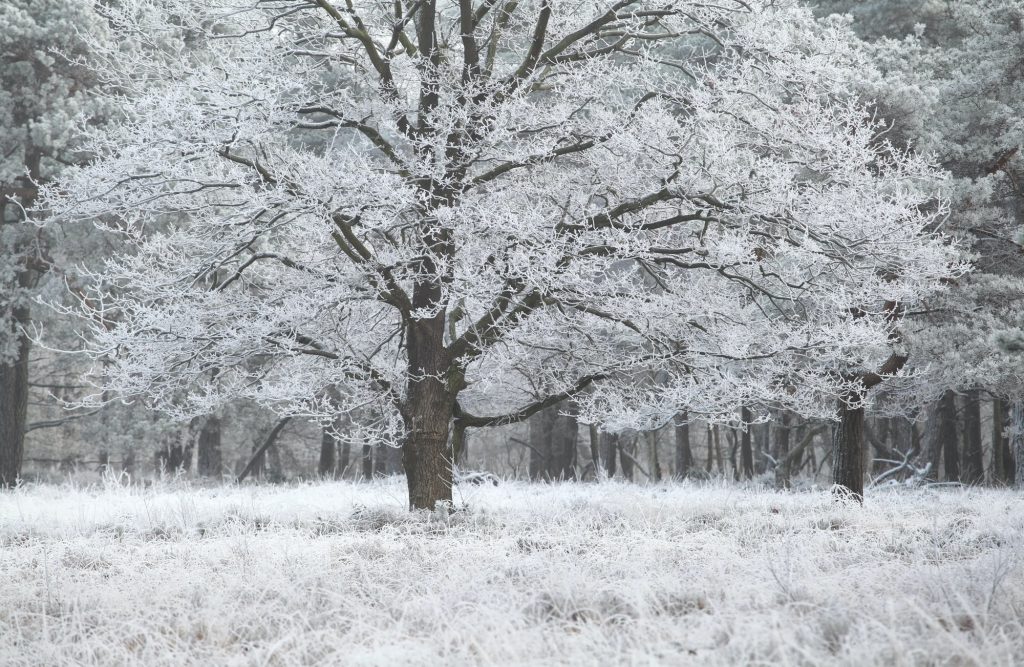 What Is the Life Cycle of an Oak Tree?

Although there are about six hundred types of oak, they all have a similar life cycle. The journey from acorn to oak tree is a long one, with several distinct phases. Therefore, oak must be managed sensibly, once a tree is gone it is not quickly replaced.

Oak trees are some of the most majestic trees in the world and can live for over a hundred years. You can find over 80 species of oak trees across North America alone. These trees not only look aesthetically pleasing but also offer several benefits to the environment.

Have you ever wondered about how oak trees grow? Known as Nature’s Greatest Survivor, every aspect of the life of an oak tree is fascinating. So here’s a quick overview of the oak tree life cycle to help you understand how these timeless beauties are born. 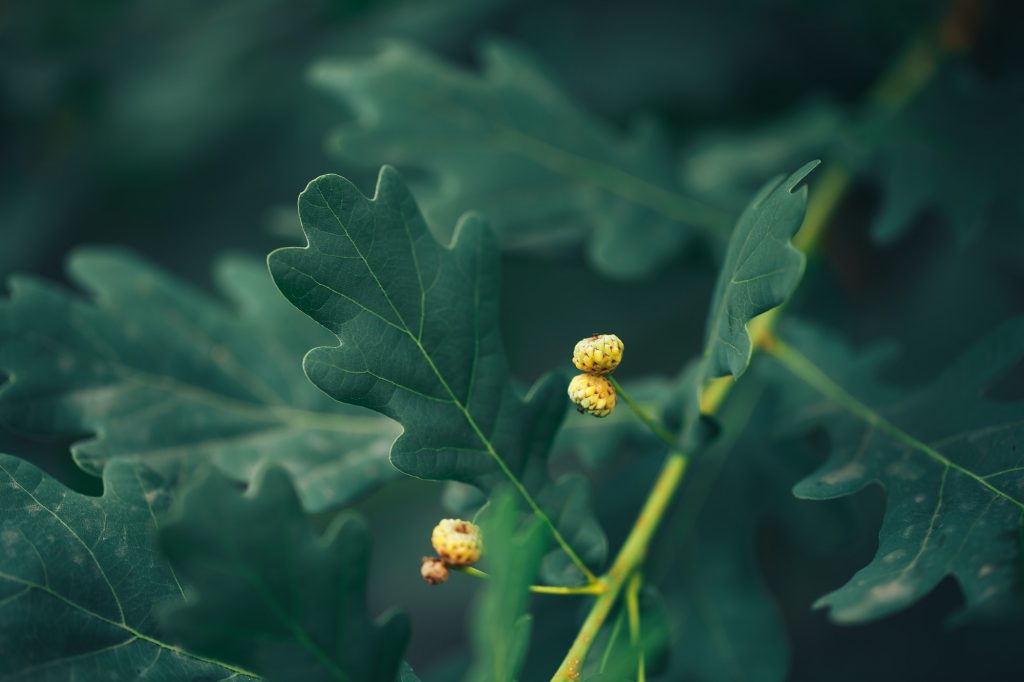 The First Stage of the Life Cycle

The journey of a mighty oak starts with an acorn. An acorn is the fruit of an oak tree and contains a seed inside. The development of acorns takes place once the female flowers of the tree are pollinated.

The structure of the acorns varies between species. For instance, the northern red oak produces egg-shaped acorns that are less than an inch in length. In contrast, sawtooth oak produces acorns with scales and curls. The diameter of such acorns is more than one inch.

Each oak tree has both female and male flowers. The male flowers consist of stalk-like structures known as catkins. Springtime is ideal for the catkins to appear on the trees, and it’s not uncommon for the trees to experience a growth spurt during this time, especially after cold and harsh winters.

The flowers of an oak tree aren’t visually attractive. The female flowers are comparatively smaller and cannot be seen with a naked eye. They are usually located on the twigs near the base of emerging leaves and typically appear a week before the male flowers. That’s why an oak tree isn’t well-known for its blossoms.

The catkins are full of pollen grains. However, the female flowers of an oak tree are usually pollinated by the pollen belonging to the male flowers of another tree. Both insects and the wind play a critical part in the pollination process.

Pollen production lasts for about three to four days. Even though the female flowers have six ovules full of eggs, only a single ovum gets fertilized to produce an acorn.

The seeds inside the acorn take anywhere from 6 to 18 months to reach full maturity. Once they mature, the acorns start falling from the tree. Acorns usually fall to the ground in the autumn. They land near the parent tree and start germinating, provided there are favorable soil conditions. However, the time of year when acorns fall to the ground varies depending on the species.

There is a tree embryo present inside the acorns. If the acorn manages to survive on the ground, the embryo uses the moisture from the environment and the sunlight to germinate. While the roots from the acorn grow deep into the soil, the shoot starts appearing on the surface along with green leaves.

The root, known as a tap root, provides a solid foundation for the seedling and also absorbs various nutrients from the soil to support the tree’s growth. The young seedling turns into a sapling, provided it doesn’t get eaten by animals or destroyed by human beings. The growth of the seedling is an incredibly slow process. It only grows 12 to 17 inches every year. When it becomes about three feet in height and has a trunk with a diameter of three inches, the sapling phase begins.

During the entire growth process, the sun, soil, and rain play a very important role.

It takes several years for the sapling to grow into a mighty oak tree. In fact, only those saplings that have a trunk thickness of more than three inches survive. The stage after sapling is known as a pole. The pole continues to grow slowly until the oak tree becomes fully mature.

Oak trees have a reputation for growing exceptionally slowly. It can take up to 20 years for a sapling to become a mature oak tree and produce its acorns. At full maturity, the tree has a trunk diameter of more than 12 inches.

Once those acorns fall to the ground, the same cycle is repeated. It’s estimated that across its life span, an oak tree produces close to 10 million acorns.

Last Stage of the Life Cycle

When an oak tree is about 700 years old, it reaches toward the end of its life cycle. It produces fewer acorns and has a very sluggish growth.

Around the 1,000-year mark, the oak tree starts to die slowly. Certain parts of the tree die first, and it’s easy to identify this phase. During this period, the oak tree also decomposes to become a tree stump. Various bacteria and insects thrive inside the stump to aid with the decomposition process. The decomposition process is vital for breaking down the tree entirely and adding the nutrients back to the soil. This makes the soil extremely fertile, which helps other trees to grow well.

Finally, the remaining part of the oak tree dissolves into the soil—the same place from where it started.

How An Oak Tree Benefits The Biosphere

During its life, an oak tree doesn’t just take resources from its local environment to survive. The presence of the tree provides many benefits to the surrounding biosphere and its other inhabitants. 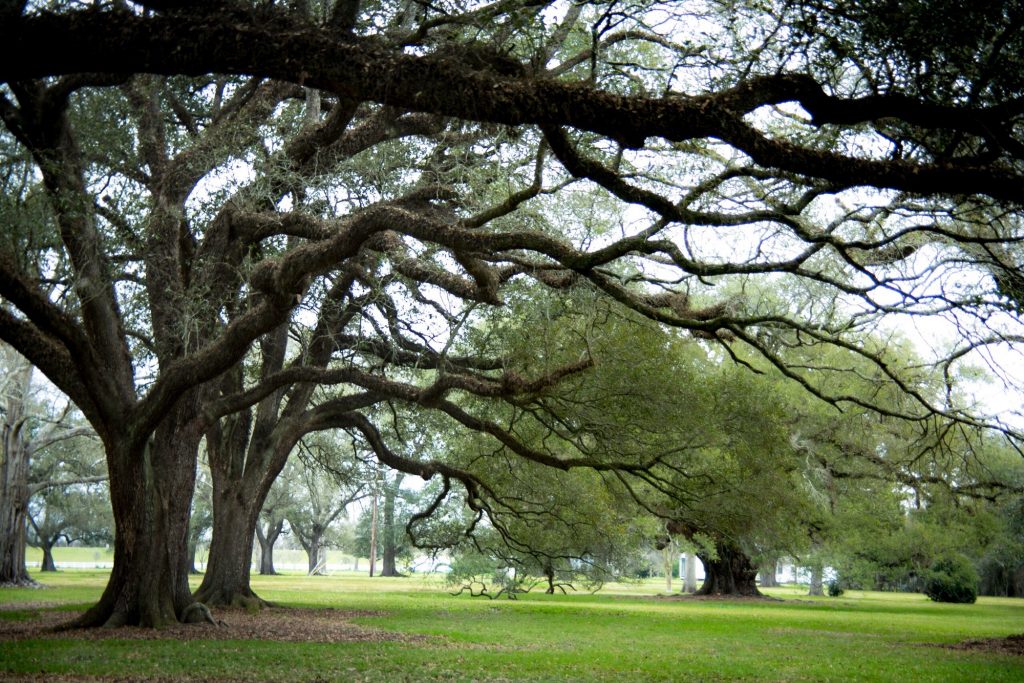 In New Jersey our Ecoregion is Broadleaved forests, oceanic as listed in the US Forest Service Guides. Below are the 17 most common oak trees found in New Jersey. Though not all of them cover the entire state. Some are only found in certain counties. 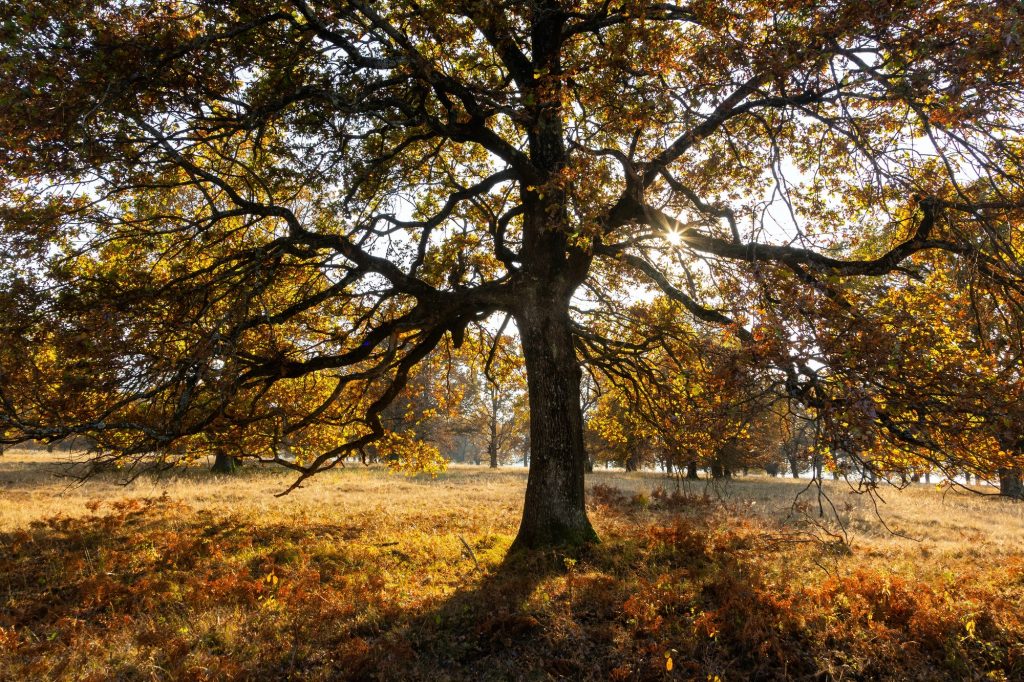 A Little History on the Salem Oak

There is probably no historic site in Salem County better known than the Salem Oak. It has been celebrated in poetry and prose for over a century, and incorporated as a symbol of the county by both private and public enterprises.

The Salem Oak estimated to be 565 years old, this ancient tree is said to have shaded the Lenni Lenape, and local lore maintains that John Fenwick treaties with Native Americans beneath its branches upon his arrival here in 1675.

In 1876, for example, a sapling from the venerable tree was planted in the First Presbyterian Church’s cemetery on Grant Street. Known as the Centennial Oak, the tree survives and thrives today. Fifty years later, in 1926, three of the oak’s progeny were planted along George Washington memorial Parkway near Washington, D. C., as part of the nation’s observance of its sesquicentennial.

The following year, Charles Lindbergh flew over the tree in the “Spirit of St. Louis” as part of a national tour five months after his historic trans-Atlantic flight and dropped a message for the citizens of Salem.

The Davey Tree Company was the arborist that took great care of this oak tree until it was uprooted. 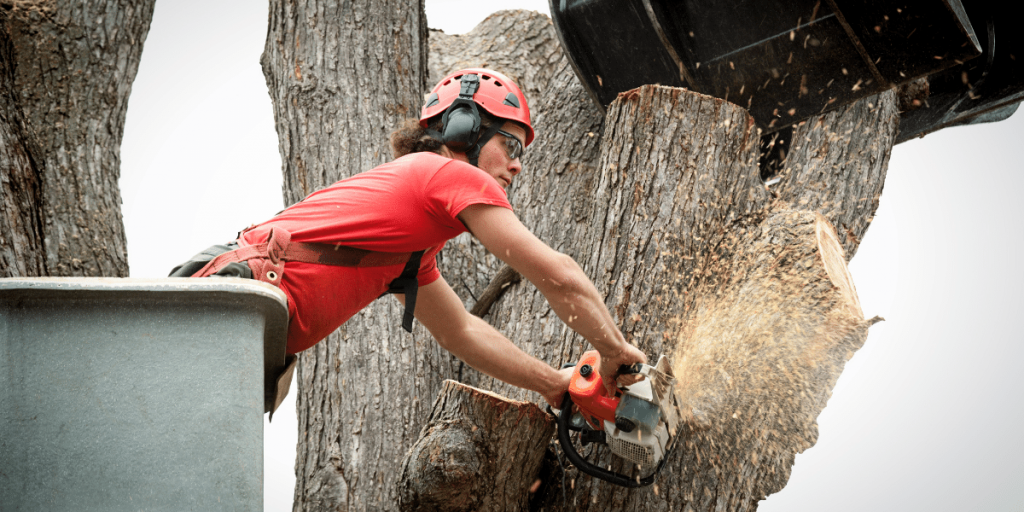 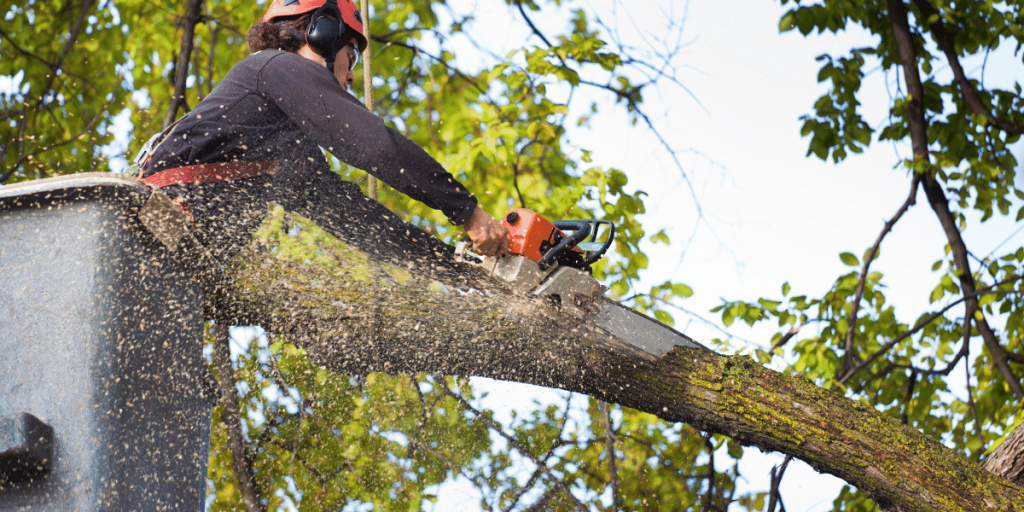 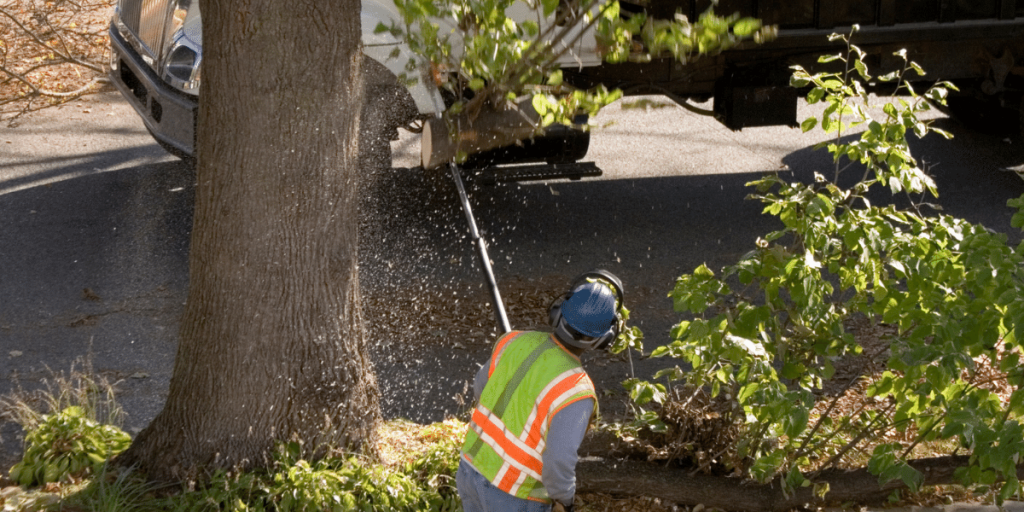 Removing a Tree From Your Property